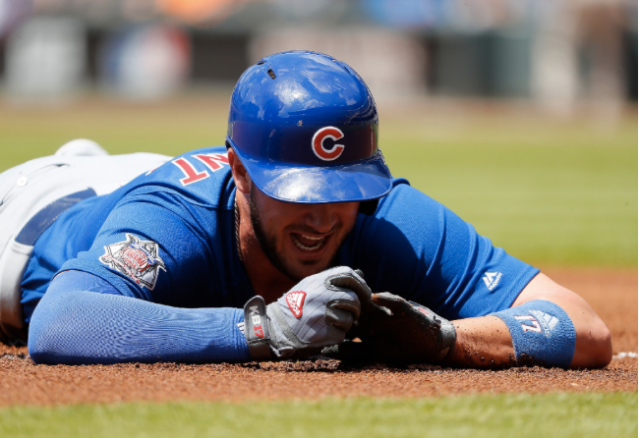 Reigning National League MVP Kris Bryant certainly scared the Cubs organization when he had to leave Wednesday’s game after jamming his finger on the foot of the Braves’ third baseman sliding head-first.

Thanks to x-rays, Bryant was quickly diagnosed with a sprain between the left pinky and ring fingers. His playing status will be evaluated again on Friday after a rest day on Thursday.

“I think we kind of dodged a bullet there,” manager Joe Maddon said. “I don’t think it’s debilitating. He heals quickly, as we’ve seen with the [turned] ankle [last month]. I don’t anticipate a long process here.”

“You slide into someone’s foot, and you obviously think the worst-case scenario,” Bryant said. “I was kind of scared to even look at my finger afterward. It was like, ‘Uh-oh, this never ends up good.’

Bryant, who had the two fingers taped together after the game, said he became more optimistic even before the x-rays, when the trainer examined him.

He said he hoped his off day on Thursday would make the difference.

Tommy La Stella replaced Bryant defensively at third to start the bottom of the first.

Bryant was 8-for-23 (.348) with a homer and three walks during the Cubs’ 6-0 sweep during their road trip through Baltimore and Atlanta. The six-game streak is their longest of the year.

This entry was posted in Uncategorized. Bookmark the permalink.